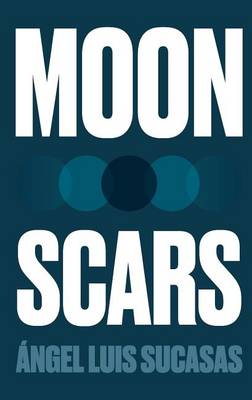 Review copy received through the courtesy of the publisher

There are countless worlds at my disposal through speculative fiction and there is a world around me waiting to be discovered. And when these two meet I wish to be able to explore the speculative works of writers of different nationalities, to see how their local influences leek into their writings. I am perfectly aware that aspects like translation, market and costs are very important to this process and make my wish a bit difficult to be granted. But I will not venture into this discussion here. Still, things are moving forward and there are publishers such Nevsky Books that make it possible to read in English authors such as the Spanish Ángel Luis Sucasas and books such as his short story collection “Moon Scars”.

“A Tale of the White Lady” – During a usual hunt Ivetta, the youngest member of a pack of three werewolves, wishes to adopt the small baby found within the hunted human group as the new member of the pack. And when finally Mikhail, the leader of the pack, accepts and transforms little Kolya, their life together is changed dramatically. The story is seen from the middle of the pack of werewolves and it approaches them not as the traditional monsters, although this side is not dismissed entirely, but as a family, both as a whole and individually through each member, with their personality, dreams, desires and flaws. The picture is completed by connecting this pack to an entire community of werewolves, spread worldwide, a link that adds elements of religion, folklore, traditions, rules and politics, without losing sight of the world of humans. And it is once again in the direct relation with our world where the table is turned, the humans look more like monstrous creatures than this peaceful, to a point, little pack of werewolves. It is a tale of love, betrayal and revenge, without clear good or bad characters, but with lively protagonists driven by strong emotions and facing their own personal tragedy.

“The Offering” – A toymaker, whose life was struck by recent tragedy, petitions to Ismina, the goddess of justice, in search of answers and pledges himself to the will of the gods. “The Offering” is a fantasy story and features a few of the traditional high-fantasy and grimdark characteristics, but the author boosts them with enough ingredients of his own making to render it originality. The end result is an outstanding and impressive world-building, especially since it is done in the restricted confines offered by the length of the short story. The setting and plot left me wishing for more stories set in the same environment, even more so since Ángel Luis Sucasas hits the high note from the beginning of the tale and hardly misses a bit.

“It is the day of the madmen. And the city of Taris is celebrating it in every street, park, square and alley. Parents are crying and moaning as their children drag them around on leashes like dogs, giving them harsh commands and kicking them in the ribs with sharp iron boots. The lord of the city, Indras, is wearing a clown’s rags and is entertaining Gulhag, the king of the beggars, and his court of the crippled and dumb. Women are dressed as men and men as women. A young elf is the most depraved participant in the palace orgies, and nobles offer up their daughters’ virtue to the imps’ eager and lustful members.”

“The Day I Refused an Empire” – Retired men, unwilling to undertake a rejuvenating process, go through the junk washed up on the shores of their place of living in search of materials from which to craft their trinkets. When the protagonist of the story discovers a woman with silver skin of the shore he ends up witnessing horrors and marvels alike. Humanity is not painted in a flattering image here, from the elders stranded on the brink of existence to everything sacrificed in the name of technological advancement there is little to be proud of in the future society described in this story.

“The world of volcanoes and lightning. Primordial soup. Cells dividing. The first creature to abandon the water. Exuberant jungles, and titans with scales and warm blood. Man, knowing for the first time who he is. History, wars and ruin and hope and glory. The conquest of the stars. The universe. And in parallel, the ones we have forgotten or exterminated. Ogres, imps, elves and fairies; naiads, nymphs, krakens and sirens. Dragged from their homes. Transformed into articles of enjoyment, of fun or sacrifice for man, the most cruel of all the beasts.”

A cross of sci-fi, fantasy and lovecraftian fiction “The Day I Refused an Empire” is also a thought provoking story on the choices one makes and the humankind’s relationship with the world and universe around it.

“Farewell” – At her sixteenth birthday Manika must leave Promisedland forever, but Tristan, her younger brother, has difficulties in accepting the situation, although it is one of the unbreakable rules set by the Architect for the inhabitants of this land. There is a new order in “Farewell”, new rules set into place, the world is reshaped and childhood and adulthood are inverted, while the chasm separating the two is wider and deeper. And all is due to the vision of the Architect, it is never clearly stated who he actually is but his identity is not important to the plot anyway. What the Architect didn’t manage to change are the emotions, happiness, sorrow, nostalgia and heartbreak have remained very much the same.

Ángel Luis Sucasas crafts worlds with unbelievable ease. There are only four short stories in “Moon Scars”, but there is an abundance of imaginings that spans far beyond its slim appearance. But plot and characters are not sacrificed on the altar of creativity, the stories are filled to the brim with emotions and conflict too, the story lines and the feelings of the protagonists are as important as the settings of the tales. “Moon Scars” is one of those volumes that make me fall in love with speculative fiction all over again.